Over the past few months, we’ve come across data breaches that are bad for anyone but the bad guys themselves. But just once in a while, we can sit back and rejoice on a breach happening.

The site was found in 2011 by a Russian national named Alexander Slavros.

While the identity of the discloser remains unknown, we do know that it was posted by someone going with the handle of “Antifa-data” on The Internet Archive. The 1 GB SQL database, however, is no longer available suggesting that it was taken down by the uploader himself or perhaps violated The Archive’s user guidelines although unlikely.

The benefits gained from this leak are immense. Firstly, as the members of such sites usually engage in hate speech and the planning of extremists/terrorist activities, this data would help authorities identify and stop those people.

Secondly, it helps us call out such hidden members of society reducing the threat of white supremacist ideas spreading across the internet. Finally, we have also gotten an understanding of the demographics of such members. This was done through an analysis of the data found by numerous entities which showed us that many of these members were an active part of the military or expressed a desire to join it in the future.

Furthermore, a link was also found between the messaging board and a US-based Neo-Nazi group called Atomwaffen Division. To highlight the seriousness of this link, one needs to look no further than May 2017 when “Iron March user and Atomwaffen Division (AWD) member, Devon Arthurs, murdered two roommates – and AWD comrades – in Tampa, Florida. Police found neo-Nazi literature in the house, along with explosives, radioactive materials, and a framed photo of the Oklahoma City bomber, Timothy McVeigh” as stated by The Guardian.

Although the link is gone, a map is currently showing IP based locations, emails, post counts, usernames, emails addresses, and Skype addresses from the leaked Iron March data: 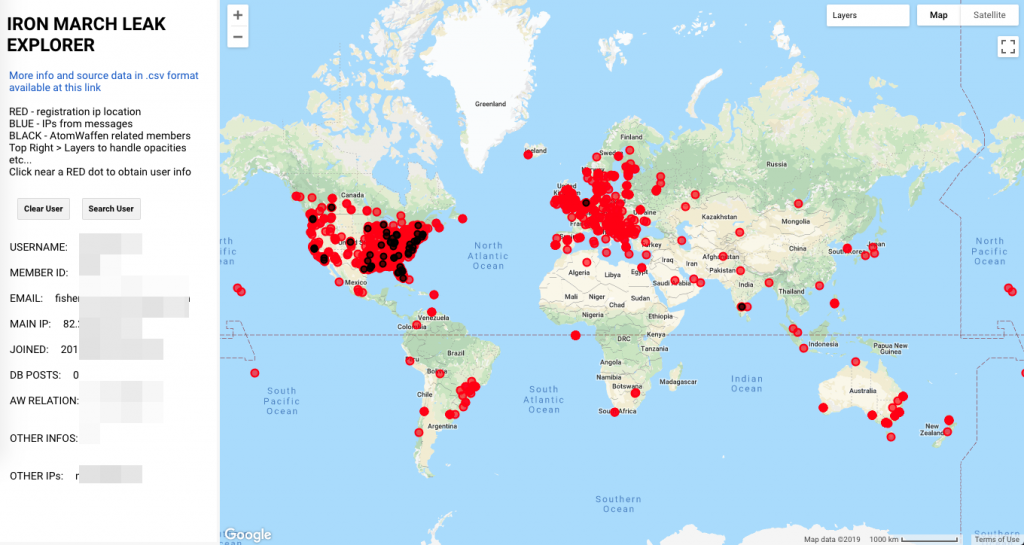 For privacy reasons, the link to this map can’t be shared in this article.

In conclusion, unlike our usual responsibility, we won’t leave you with suggestions to be safe from such leaks. After all, this is a good one. Nonetheless, we all should take notice of where such activity could take root and make sure our family and friends, particularly the younger ones steer clear from such sites.